Adopting a dog, instead of buying one from a breeder, is not only about money.  It is the honorable thing to do because you are saving a life, no matter which option you’d choose.

This is hardcore because you know nothing about the dog.  No clue.  Will he bite?  Is he sick?  And there’s no “return policy.”  You may also have to spay/neuter the dog, give vaccinations, and/or pay for training.
* Upon completion of legally required procedures to seek the dog’s owner/guardian.

Saving a dog from the pound

Go to your local animal control facility.  They can only tell you if the dog was dumped by his family or found on the street, and you won’t know if the dog is incubating a fatal disease.  If the dog becomes unmanageable, you can return the dog, but your conscience has to be aware that the dog you return will most likely be killed because returned dogs are generally ill-fated and often considered undesirable.

Adopting a dog from a rescue organization

You’d pay more, but this is actually a bargain because:

When an organization rescues a dog, its first stop is a veterinarian.  Most of such dogs usually have some conditions from their stressful life and malnutrition.  If the dog is not spayed/neutered, they take care of it, along with vaccinations.  Vet bills can add up to several thousand dollars, depending on his/her conditions.  If the organization cannot find a foster home, it has to pay for boarding, which is about $500/month.  Unless the dog is a young, purebred with a sweet disposition, the organization should be prepared to support the dog for at least a few months.  If the dog is older, larger and has behavioral issues, it could take a year or even longer.

Bona fide rescues also take back their former orphans if you become unable to keep your dog in the future, whether you’ve became too ill or lost your job/home to care for your dog.

If everybody rescued a dog from the pound or a stray from the streets, that would be the best, but adopting a dog from a rescue organization would also indirectly save a life because you are making room there for another dog to be rescued. 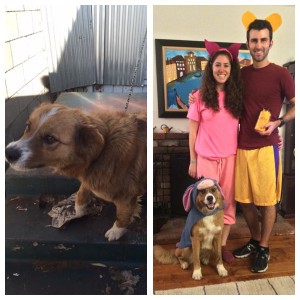