I watched a documentary film about a decade ago, in which an ex-rancher told his heart-wrenching story. He was taken to a farm animal sanctuary one day, and he signed up for “adopt a cow” program, which designated a calf for him to sponsor. He did that out of the goodness of his heart. Nonetheless, he went back to his ranch and continued slaughtering cows, because those were “two different things” to him.

A year later, the rancher went back to the sanctuary. The calf, now a cow, recognized him, ran to him and put his forehead against his chest. That was the moment the rancher realized that the cows are sentient animals with feelings and emotions. He went home and closed down the livestock ranch.

There was a family that had a pig farm, from which the pigs were sent to slaughterhouses. Pigs lived in pens. When the family had to clean a pen, they told the pigs to move to another pen. They repeated this routine, and one day, they realized that the pigs were obeying their commands to move from one pen to another. They tested more commands and found out that they were as smart as, if not smarter than, their dogs. They made the twenty or so pigs they had at the time as their pets, and quit raising them to send to slaughterhouses.

A cow-slaughter rancher once told me that he had pet cows. I asked how he differentiated them from the rest he kills. He said that once he names a cow, he can no longer kill that cow.

A matador said in a interview that he would/could not fight the bulls he raised because of the bond between them. He said most matadors don’t fight the bulls they raise for the same reason.

A friend of mine told me that when she was preparing a turkey for Thanksgiving, she saw her Cocker Spaniel at her feet, and then looked at the dead bird on the counter who was beheaded and gutted out — she said to herself, “Oh my gosh, their bodies are the same size and look alike!” That moment she felt like eating the turkey was no different from eating her Coker Spaniel and became a vegetarian.

Esther the Wonder Pig’s guardians wrote on her Facebook page that one day when they were cooking bacon, Esther was looking up into their eyes and that was the moment they recognized the connection — they were eating their beloved “daughter’s” brothers and sisters. They instantly became vegan.

And this “who let the cow in” video is going viral: Listen to what the mother says at 5:01.

These are some of the stories that inspired me, and hope they will you too, to make “the connection” between your habits and compassion, especially through this holiday season. And may the connection last ever after. 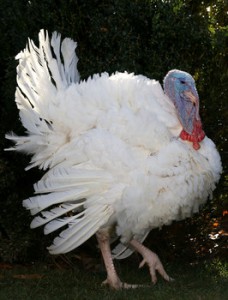 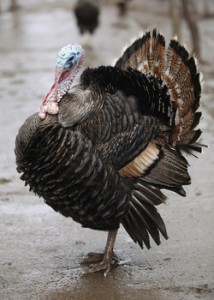