Many people consider their pets to be family members. Therefore, it is not uncommon for pets to be named as beneficiaries in wills and/or living trusts.

Often the bequest for pets includes leaving a large sum to an animal rescue organization or a sanctuary that is instructed to care for and re-home your pets. The problem with doing this is that, in most cases, your animals will be held in a boarding facility, and a foster home cannot be guaranteed. Also, you have no choice regarding the home and people your pets will end up with.

The best option for your pets, if possible, is for a trusted friend or family member to move into your home and live with your pets after your passing or becoming incapacitated (for the latter, you need to execute a Living Trust and Advanced Health Care Directive because your will would not take effect until your death). Appointing an executor is necessary to oversee your estate and ensure that your appointed caretaker for your animals abides by your wishes. A monetary incentive should be specifically established for the live-in caretaker to maintain your pets’ good health and proper care for the rest of their lives.

I have done exactly this. My living trust names a friend who will have the option to either live in my house with my animals or designate someone, who will give my animals the best care, to live in my home. This continues until all my dogs join me at the “rainbow bridge.” Upon my death, as I no longer have any living relatives, my Living Trust stipulates that my house will be sold and the proceeds donated to Forte Animal Rescue.

Last year, we rescued 10 dogs whose guardian passed away. Her death was not discovered for 5 days after her passing in her home, but her dogs somehow survived. They drank all the available water including from a toilet bowl and broke into the pantry for food. Had she been discovered any later, her dogs would have died of starvation and dehydration.

Upon the discovery of her passing, police put the dogs in the pound, and while we originally intended to rescue two, we could not leave the rest behind, and saved all of them. As some of them were quite old, we were not certain if we could place them, and I certainly did not want them to spend their golden years in kennel cells. It was a miracle that they all found great homes.

These dogs were lucky to have a rescue group that would be responsible for their outcome because their guardian had established no plans for their care after her death.

None of us likes to think about our own demise, but we all know that this life is finite. It is the responsibility of each of us to protect our loyal animals through their lifetimes, whether or not we are here with them.

It’s better sooner than never to prepare your will and living trust. 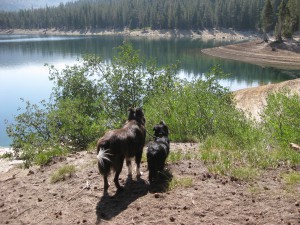