There have been many lives that were saved by no other explanation but a miracle. Some were saved at the very last minute as a fluke and others by a chain of events that made their rescues possible.

Several years ago,  from the pound. Mirabelle was old and as a large breed, we thought she would be another hard case to place. We continued our efforts in promoting her adoptions by posting online ads, showing her at our weekend adoptions and placing ads in local weekly newspapers. No response.

A couple months later, we received a call from a man who saw her ad in The Argonaut. Why two months later? It was because he saw her ad where the newspaper had been used as packing material in a box containing something he purchased on eBay. It was right after their family dog, also a Rottweiler passed away, and it tugged at his heartstrings. He promptly contacted us and the rest was history. 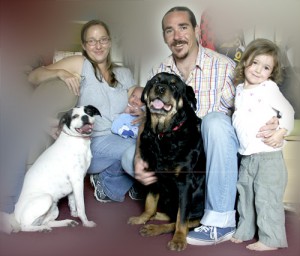 What are the odds of this happening? If the shipper had grabbed different pages from the paper, or if he had used Mirabelle’s page in a different package, who knows how much longer it might have taken us to find a permanent home for Mirabelle.

Another miracle took place when we had two senior dogs, Midnight and Koiney. A real estate agent learned that a client of hers was planning on dumping his 2 dogs at the pound when he moves into his new condo.??One dog was 15 years old, and the other was 11. My dilemma was that I did not have any available foster home for the two seniors, and I hated the thought of putting them in kennel boarding where they’d have to lie on a hard, cold surface, which would be rough on their old joints. Being dumped by someone they’ve trusted all their lives is traumatic enough, and to be put in a jail cell is not something they should go through. I was desperately looking for a way to find a foster home for these dogs. The realtor told her client that his dogs would be killed at the pound, but he did not even care. So, it was up to me and my team at Forte Animal Rescue.

Placing an old dog is already a challenge, let alone two of them! I spent many sleepless nights with anxiety when I was not getting any results from all our promoting efforts.

Then a phone call came in. Someone heard about them on KOST radio and contacted us. She said that her two dogs passed away at 14 and 18 years old, and she wanted to adopt a bonded pair. She also wanted to adopt older dogs because she herself was getting old and would not be able to take care of dogs for the next 15 years if she adopted a young pair. So, she adopted the two of them together.

The mystery was that I did not know how Midnight and Koiney’s information and our phone number reached KOST radio. None of our volunteers contacted the radio station. I sent out an email to those whom I emailed my original plea, asking them to find out who reached out to KOST, so that we could thank that person.

Nobody knew. And the lady who adopted them said that she turned on the radio for mere 5 minutes or so while she was waiting for someone. It was complete serendipity that their story was on air during this very small window. If this was not a miracle, I did not know what was. 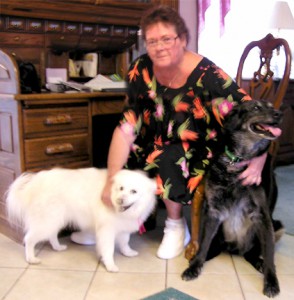 There are a few more dozens of small miracles like these among the 1,100 dogs we have saved in the past 11 years. They took place when they were most unexpected, and I was compelled to believe that it was led by the spirit of my late dog, Forte in whose name these dogs have been rescued. Or, it could be the shift of energy in the universe when many people put their thoughts in a particular dog’s fate as they read his/her story. We would never know. But when more people have compassion and help spread the word, the more miracles seem to follow.

So, next time you receive an email or see a Facebook post asking for help to save a life, click on “forward” or “share” before you delete it because it could be your one click that may reach the very person who will end up saving that life.